Public service media, in its different reiterations, is needed more than ever to support and defend democracy.

While political and cultural contexts, organisational configurations, funding models and resources, even programmatic priorities and technological capacities may differ, the unifying characteristics remain: the basic, traditional mission and remit of quality services to all kinds of audiences. And while pressures on public service media mount all around the world, there are many strategies that exemplify and support that mission. This was the powerful message of  the PMA Conference Speak Out! Rebuilding Trust in Media and Democracy, in Kingston, Jamaica, 13 August 2018.

See my report on the conference, here. 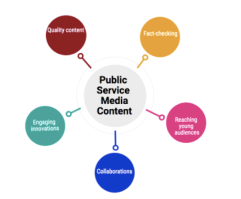 This White Paper for the Center for Media, Data and Society, Central European University, paper builds on the Center’s public media speakers series, focusing on a specific challenge for public service media: “#fakenews” and #disinformation, or more broadly, the current “information disorder”. The paper draws from the outlined problems and threats, as well as opportunities, strategies, and tactics of public service media institutions around Europe with regard to tackling this challenge. 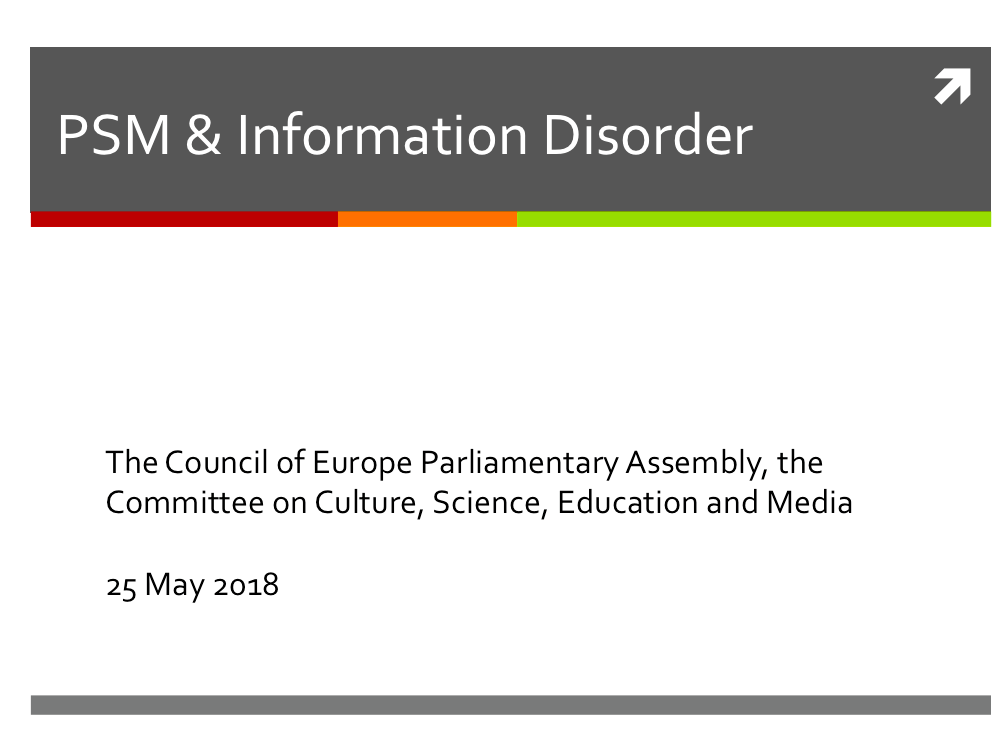 Esteemed Members of the Council of Europe Parliamentary Assembly, the Committee on Culture, Science, Education and Media;

END_OF_DOCUMENT_TOKEN_TO_BE_REPLACED

PSM should be the institutional harbingers of universality and public interest media: principles that bring people together.

But do they play that role anymore? Can public service media institutions survive these tumultuous times?

Shrinking platforms for public debate and diminishing support for media as a public good are challenges that CMDS is currently addressing. ThePublic Media Speakers Series launched in March 2017 is part of these efforts. The goal of this series is to go beyond conventional academic analyses of public broadcasting and showcase visions, as well as concrete strategies and tactics, of the roles public service media should play. The series addresses issues that include management and governance, policy, and journalism in public service media, as well as strategies to advocate for the protection of public service media from political pressures.

CMDS is running this series in cooperation with RIPE@GLOBAL, an influential global network of academic researchers and strategic managers with expertise in every relevant dimension of public service media. RIPE was established in 2000 in Finland and is a worldwide community today. One of RIPE’s core projects is the development of a Global PSM Experts Network, featuring an open access expert roster and active social media community of academic and applied researchers of public media.

“RIPE is committed to collaboration in curating these important conversations about the present, and ultimately the future, of PSM,” said Gregory Ferrell Lowe, Professor of Media Management at the University of Tampere (Finland) and RIPE’s Continuity Director. “We need multi-stakeholder views and involvement to build better understandings of the challenges and their different manifestations around the world. That is a firm foundation for collaboration.”

The series kicks off on March 2, 2017 with Jawhar Sircar’s public lecture: Public Broadcasting in India: Success and Failures. The lecture is organized in cooperation with the CEU South Asia Research Group.

Executive Orders, staffing choices, unusual foreign policy moves, interesting “facts”, and numerous related tweets have dominated recent news about the new U.S. president and his administration. Perhaps that is why little attention has been given to the signs that the Trump administration will most likely cut funding for Public Broadcasting Service (PBS) and National Public Radio (NPR).

A few stories emerged mid-January, prompted by this article in The Hill, referring to the budget suggestions by the Heritage Foundation. It is rumoured that Trump will follow these closely. This is what the Foundation’s so called Budget Book says about the Corporation for Public Broadcasting (CPB), the umbrella organization channelling funds for PBS ad NPR:

The CPB made up only US$ 444m, or 16%, of this amount. Without federal funding for the CPB, services such as PBS and NPR, which receive funding from the CPB, could make up the lost money by increasing revenues from corporate sponsors, foundations and members.  The goal of CPB is also increasingly met by other media sources.”

The Republicans have traditionally used public broadcasting as fuel for political debates. Unsurprisingly, Republican and pro-Trump news outlets have celebrated the idea of budget savings and invoked the claim about the enormous diversity of content choices on cable TV. Also, some throw in arguments that the federal government is currently funding biased news coverage by NPR — and this must stop.

Bias is a difficult question to verify. But, as Salon reports, 95% of the U.S. population can access public broadcasting’s over-the-air signal as part of its universal service mandate. This includes rural communities and economically disadvantaged viewers who cannot afford to pay for cable TV. In addition, NPR has been at the forefront of digital innovation — and it shows in audience ratings: NPR stations have outperformed many of their commercial news counterparts. It also remains the number one Podcast publisher in America. To put the proposed savings in context: the share of CPB of the federal budget is reportedly 0.01%.

Regardless, the plans of trumping public media are now moving forward. At the end of January 2017, Republican congressman Doug Lamborn introduced two bills: firstly to defund the CPB; and, secondly, to prohibit NPR from receiving funds from CPB, or public radio stations from using federal funds to purchase programming from and/or pay dues to NPR.