This White Paper for the Center for Media, Data and Society, Central European University, paper builds on the Center’s public media speakers series, focusing on a specific challenge for public service media: “#fakenews” and #disinformation, or more broadly, the current “information disorder”. The paper draws from the outlined problems and threats, as well as opportunities, strategies, and tactics of public service media institutions around Europe with regard to tackling this challenge.

Esteemed Members of the Council of Europe Parliamentary Assembly, the Committee on Culture, Science, Education and Media;

END_OF_DOCUMENT_TOKEN_TO_BE_REPLACED

Recent turbulence at the Polish public broadcaster was seen by some observers as another political football game. Public broadcasting will survive any market or policy changes, however tumultuous they are, they say. But public TV has fallen out of political favor in many countries now. Even well-established broadcasters in western countries are likely to be dramatically downsized.

Poland has been featured in global news in the past weeks. A controversial law was passed that allowed the replacement of the directors of Polish public TV and radio with political appointees.

The Center for International Media Assistance (CIMA) notes that this may well be the first step by the Polish government in curbing all free media and commercial outlets. CIMA also reminds us that just a few years before Poland, Hungarians witnessed a severe media crackdown.

Many might indeed disregard events in Poland as symptomatic to relatively young public media countries. Most experts have contended that that public service broadcasting (PSB) has existed as a principle, as well as as an institution, for almost a century in many Western European countries. It has been an essential tool in building nation-states and European democracies. This is why, it has been argued, PSB and its version including digital platforms, public service media (PSM), will survive even tumultuous changes in media markets and in government policies.

Or perhaps not: One of the first countries to disregard public service ideal of independence and plurality was Italy, a PSB country by long tradition. During Silvio Berlusconi’s regime of four governments, the Prime Minister had the power over both his commercial media conglomerate as well as the public service broadcaster RAI.

Lately it seems that public service media have truly fallen out of political favor in many European nations. It may have seemed shocking when the original Greek public broadcaster ERT was abolished in 2013 following a government decision (ERT did reopen in mid 2015). But now we have heard the news from Poland, and also Iceland. The centre-right Independence Party of that Nordic country proposes “selling certain State assets”, including the State’s share in Iceland’s national television and radio broadcaster, RUV.

Serious re-envisioning of the possible future of public service media is happening in mature public service countries such as Finland. While a parliamentary working group will announce their vision around mid 2016, a ministerial working group on media markets has recently suggested that the Finnish public broadcaster YLE should drastically reduce its own operations and act as a distributor and purchaser of Finnish productions.

This so-called public service producer model has been proposed in the U.K. a few years back. But now things in Britain may just resemble the situation in another country. The columnist Peter Preston noted in The Guardian about the most revered public broadcaster in the world, the BBC, and its ongoing charter renewal process:

“Would anything very much about the recent history of BBC governance – or now, amid the churn of change – pass muster in Warsaw? Freedom can turn to sausagemeat anywhere you look.”

Indeed, CIMA reports that according to the watchdog organization Freedom House, already six EU countries – Croatia, Greece, Hungary, Italy, Romania, and Slovakia – rank as merely “partly free” in terms of press freedom. Is it that, while proponents of independent media and scholars of democracy happily continue to believe in the sanctity and eternal life of PSB, conservative political and other powers-that-be have no nostalgic love to spare to those ideals? The worst scenario is that not only public broadcasting but broader communication rights are slowly making a quiet exit through the back door. 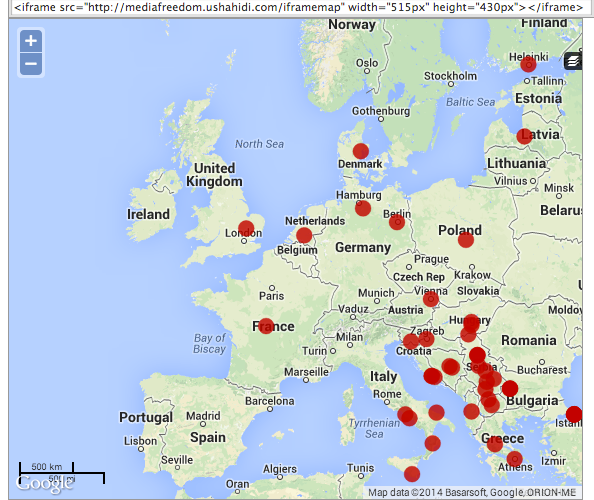 Great news — a project to map media freedom, with Ushahidi:

Index on Censorship and Osservatorio Balcani e Caucaso are joining forces to map the state of media freedom in Europe. With your participation, we are mapping the violations, threats and limitations that European media professionals, bloggers and citizen journalists face everyday. We are also collecting feedback on what would support journalists in such situations. Help protect media freedom and democracy by contributing to this crowd-sourcing effort!