Proud to have been a part of this amazing event!

END_OF_DOCUMENT_TOKEN_TO_BE_REPLACED

Do we know who owns the media we consume and use? What are the algorithms guiding our consumption? Who can curb hate speech? The phenomenon of “media capture” takes place when both governments and commercial interests align against public interest media and transparency in governance of media organizations and platforms.

Like Loading...
Reposted from MediaPowerMonitor.
Everybody agrees that media helped, to a great extent, make Trump president. So what went wrong? The week after election day, theories about media failure flooded American public sphere.
Everyone has become a political scientist today: the United States elections have sparked a cascade of theories about why few people within the country and abroad anticipated the outcome. Equally, many commentators, on TV or in the pub, claim that they saw it coming, but that no one listened to them.
Judging from the public debate in America and abroad after the elections, no other institution or phenomenon is as much to blame as the media for how badly informed the public was, which in the end was what led to the election of Donald Trump. When citizens, pundits, and the media themselves are all calling for the reinvention of quality journalism, reform of news organizations, and rethinking of social media algorithms, looking back and mapping the explanations of how it all went wrong is a useful, and in some ways cathartic, exercise.

The most often invoked explanation is that the old-school, legacy media are no longer the Fourth Estate, the watchdog that informs citizens about the actions of the Power Elite. The media have become elitist themselves, focusing on the rich and famous instead of covering the concerns of Middle America. Instead of policy proposals (if there were that many), headlines captured Clinton’s health and Trump’s relationships with ladies.

The Media Are Profit-Driven Pollsters

The essence of this theory is that, to keep the news going and the eyeballs stuck on their broadcast or websites, the mainstream media focused on bombarding their audiences with data, but did not properly analyze those data or put them into context.
The week leading to the elections featured 40+ polls a day during the weekday and some 20 polls on Saturday and Sunday each, according to Realclearpolitics.com. No wonder that after the elections, media analysts kept browbeating the media for throwing on readers data that eventually failed them. “It was a rough night for number crunchers,” the New York Times wrote on 10 November 2016. “And for the faith that people in every field — business, politics, sports and academia — have increasingly placed in the power of data.”
Some theorists say that perhaps the trust of media in polls was too exaggerated or even bordering on naïveté, or journalists were too eager to write yet another election story and thus needed some numbers.

The Media Are Bullies

A third explanation of the failure of media in the past elections is that they acted like bullies.
However, there are, in fact, several opinions about who the bully was. One is related to polling and public opinion. It claims that the mainstream media ridiculed Mr Trump so much that that many of his supporters were silenced (but did not change their political views). They did not want to admit their views to journalists or talk to the pollsters. That massively distorted the media depiction of reality.
Another version of the bully theory is that Mr Trump used mainstream media to publicize his outrageous statements, and media happily obliged as they made great headlines. And we know that great headlines bring audience and ad cash.
The third, but related strand blames semi-independent, sometimes semi-professional trolls who could now mobilize fringe groups by shouting ugly things very loudly in social media.
Finally, many consider the Wikileaks revelations right before the elections as targeted bullying. Julian Assange, WikiLeaks mastermind, sees in WikiLeaks a new kind of journalistic organization. As America was embroiled in the campaign for president, WikiLeaks published tens of thousands of emails and documents related to Hillary Clinton’s campaign.  Mr Assange said that they decided to do so because they believe in the right of the public to be informed. He said that they didn’t publish anything on Mr Trump simply because they didn’t receive anything.

The Media Are Liars

What is worse: to be a bully or a liar? By taking a strong stance for their preferred candidate, many mainstream media outlets are said to have alienated audiences, especially of the opposite camp. At the same time, they did not fact-check enough, or early enough, to push candidates to respond on air.
The trust was gone. Some say Mr Trump’s supporters didn’t even care. They did not take the content seriously, but rather trusted the spirit, the intent, and the core mission of his campaign. Social media reinforced this by fostering bot-created tweets and fake news, and by promoting them through algorithmic selection.

Maybe the worst, or fundamentally saddest theory of social media failure in the past election, is about the social division they created instead of building a common, transparent, equitable public sphere for rational debate.
While social media was hailed as the mobilizing and unifying force for Barack Obama in 2008, now these platforms helped to form very distinct camps that hardly ever conversed beyond insults. The division, so sharp as also shown by the vote split, seems to go on, a week after the election, spilling over to the physical world: #notmypresident.

A team of students from COM 3102 and 3103 (International Communication) have taken on a challenge by Global Challenges Action Network (GloCha). They are to think about, and visualize, communication and marketing strategies for GloCha’s globally broadcasted TV edutainment and fundraising show on youth and global challenges, happening in the UN climate change meeting at COP22 in Marrakesh, Nov 2016.

The United Nations and the European Union organized a meeting in April 2016 to discuss how to communicate big global issues, such as the new Sustainable Development Goals, to the general public. Here are some take-aways: 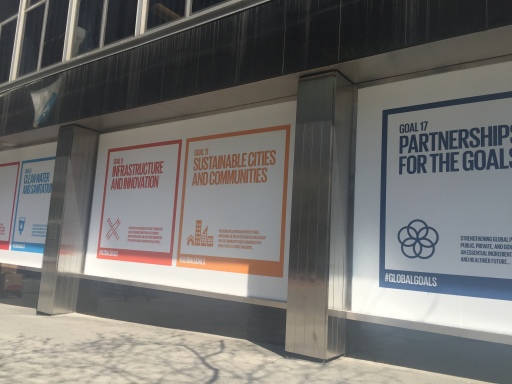 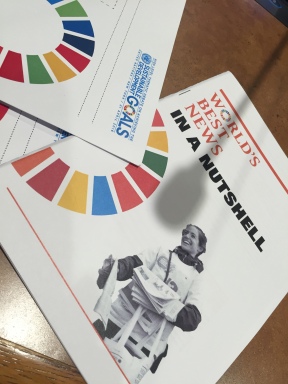 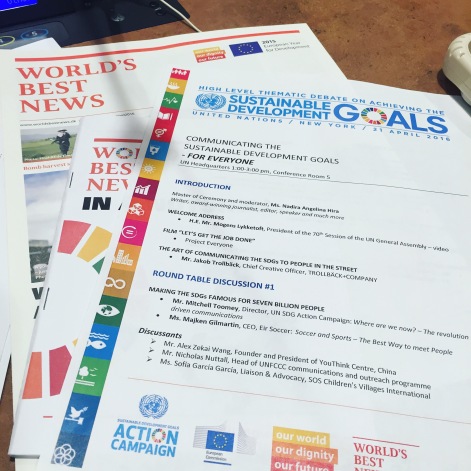 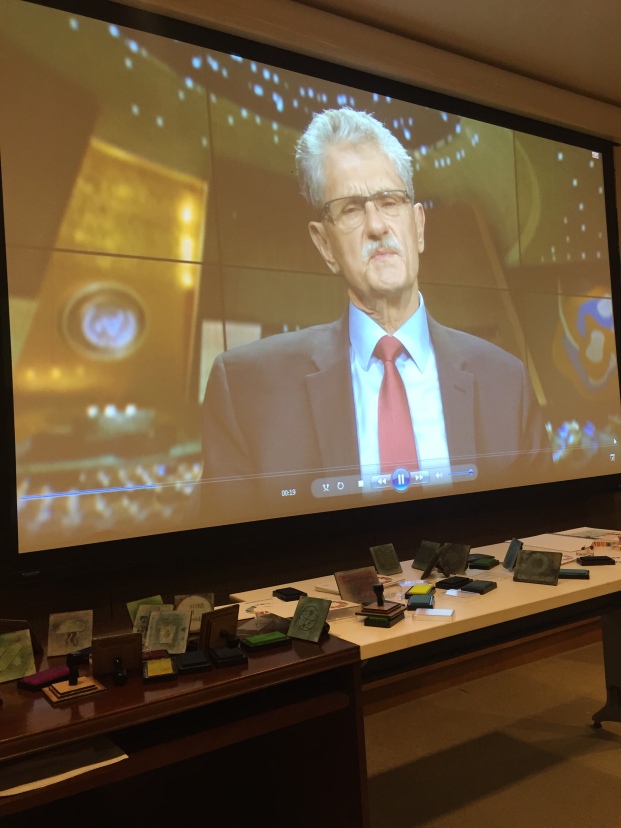 In the meeting, that gathered together UN representatives, advertisement and marketing professionals, non-profits, and other experts, several issues emerged: 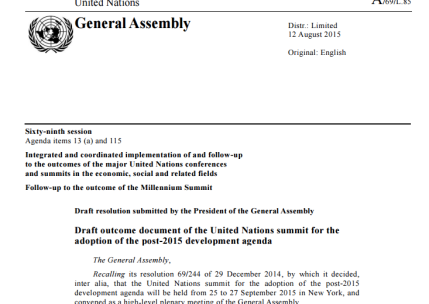 I think is a cute video and it’s visually understandable for anyone who doesn’t know much about climate change. These types of videos, in my experience at least, helps to get people interested in a topic. I wouldn’t use it for a room full of scientists but for college and high school students who are hearing about climate change for the first time, I’d highly recommend this.

GloCha is a part of a larger, UN accredited civil society organization called IAAI, headquartered in Klagenfurt/Austria (International Association for the Advancement of Innovative Approaches to Global Challenges).  Together with several UN and other partners, GloCha is planning a globally broadcasted TV edutainment and fundraising show on youth and global challenges in the context of COP22 in Marrakesh, Nov 2016.

Before that, they present their ideas and other input to the forthcoming United Nation Framework Convention on Climate Change (UNFCCC) Article 6 dialogue in Bonn in May 2016.

GloCha wants advise from young communication experts, you. They need suggestions, insights, ideas — big and small — for a comprehensive communications strategy for the edutainment/fundraising show, including, but not limited to:

From the future of work we move onto our last “lecture”: The Digital Future in general.

As science-fiction-like as it may sound, the biggest development debated right now is Artificial Intelligence.

One of the most fascinating thinkers, futurists, is Ray Kurzweil. He has coined the term singularity:

The Singularity is an era in which our intelligence will become increasingly nonbiological and trillions of times more powerful than it is today—the dawning of a new civilization that will enable us to transcend our biological limitations and amplify our creativity.

Here is a fascinating documentary about Kurzweil and his work, as well as other futurologists. Like many of his colleagues, Kurzweil believes we will reach immortality at some point. Some prominent thinkers predict that the human race may become extinct, or remain inferior, to AI. See for yourself:

There are differing views about timing, but many technologists expect AI to reach human capacity before 2060.  Kurzweil has made numerous predictions on the development of technology, and here’s what he predicted in 2005 for the 2010s:

Many of the above predictions are here already. Many companies are indeed investing on AI and the examples of the uses are already here. There are plenty of debates about the benefits and risks. Some claim that the people creating the technology are the problem, not AI themselves. Others predict that AI may take over the human race. It’s then no surprise that Cambridge University (UK) has just established a centre for AI Ethics.

Back to planet Earth. We have seen amazing digital communities helping the world; but we have seen destructive dissident communities and mentioned the Dark Web. We have often discussed digital divide, in terms of economies (developing and developed countries) as well as in terms of generations. Whatever the development of AI, there are still plenty of challenges and possible solutions for digital communities to tackle, from E-goverment to MHealth. And yet: A recent global research effort called the Hidden Digital Divide notes that even if the world is getting more connected, having access doesn’t guarantee equality. We need to include questions of speed, devices:

The rapid penetration of mobile phones with some internet capacity into even the poorest, off-grid regions helped reduce the gap. But the digital divide has evolved to mean much more than whether someone can or cannot get online. It now incorporates wider issues such as the speed and quality of access. In the world’s most advanced mobile markets — namely Japan, South Korea and the United States — those on high-speed fourth generation (4G) networks can consume twice as much data every month as non-4G users.

This means that, however fast developing countries race to catch up, those in front continue to accelerate away. All this raises ethical questions.

Maybe A.I. can somehow overcome the digital race for the ever more developed app and fancy gadget. But what does AI do to our humanness, including our need and desire to truly bond with others? Communities are very human constructs, bound by societal developments. Are we already witnessing a new breed in digital communities, where the physical characteristics is no longer necessary, sometimes not even meaningful?