What constitutes “public service media” (PSM) – its remit, its independence, its funding, its organizational configurations – is never set and self-evident. It constantly faces opposition from commercial competitors as well as political actors that seem to manifest in different reiterations year after year.  At the same time, its core values of universal service, public interest, and preservation of national culture can be found also outside of the Western PSM models.

This was the recurring theme in the IAMCR Post-conference Public Service Media in a Time of Global Reordering: Sustainability, Reinvention and Extension (25 June 2018), co-organized by Alessandro D’Arma from Westminster University, Yik Chan Chin from Xi’an Jiaotong-Liverpool University, and Minna Horowitz. The event featured an array of cases that documented significant challenges but also interesting openings for unconventional and fresh thinking about public service media beyond the European iterations.

Not Taken for Granted: PSM and Independence

The first session of the day focused on public service media and independence: it highlighted the subtle (and not-so-subtle) ways even mature PSM organizations been exposed to political “media capture”, but also recognized policy and popular support for them. It seems we are experiencing a watershed moment in many countries, and in the EU as a whole. While independence has always been a complex ideal to meet in practice, currently it needs to be supported and fought for –– once again, anew.

Steven Barnett from the University of Westminster discussed how the new governance arrangements for the BBC (post-2016 Charter renewal), and in particular the growing role given by government to the external regulator Ofcom, pose a real danger for BBC’s independence.

Tabe Bergman from the Xi’an Jiaotong-Liverpool University discussed the Dutch case. PSM have faced severe budget cuts since 2010 by the successive government sympathetic to the arguments of commercial rivals that PSM represents unfair competition.

Corinne Schweizer from the University of Zurich talked about the recent ‘No Billag’ referendum in Switzerland to abolish public funding of PSM. The vote was preceded by “an extraordinarily intensive debate”. The outcome of the referendum was a rejection of the initiative (with a 71,6% majority), demonstrating continuing strong support for PSM, even among youngsters.

Maria Michalis from the University of Westminster discussed the EU approach to PSM concluding that the many declarations and statements on the importance of independent public media can at best support, but not guarantee, processes towards independence. Historically, the EU has been able to exert greater influence over democratic matters such as PSM before states become full EU members.

Finally, Peter Thompson from Victoria University of Wellington (and Chair of the Better Public Media Trust) updated attendees on the case of New Zealand where the new Labour-led government’s approach to revitalizing public media is being “fiscally compromised” in the face of budget and institutional constraints, similarly to the situation a decade earlier. 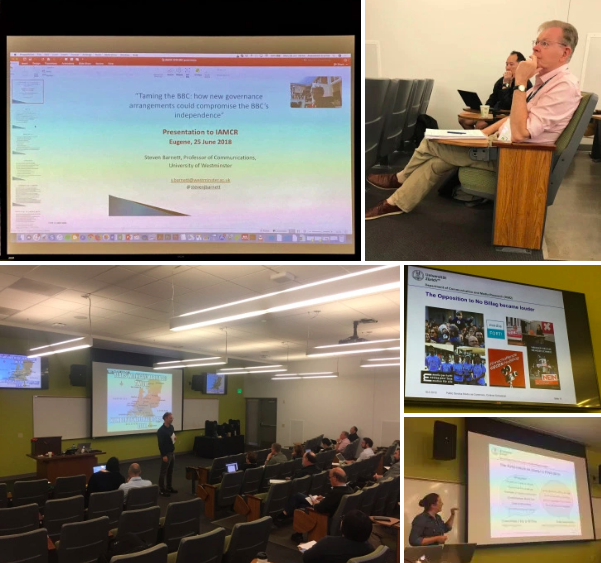 PSM and Its Special Kind of Impact

The second session of the day, ‘PSM and Impact’, continued the discussion of critical issues that mature PSM systems are confronted with, but also focused on prominent examples of PSM success, impact, and innovation.

Michael Huntsberger from Linfield College discussed the “third sector” of community media in the US. Notwithstanding the political and financial constraints that the sector faces, Dr Huntsberger highlighted its public service role and argued that localism is a core public service value in the contemporary media ecology and an ‘asset’ that PSM can leverage as part of their political case-making.

Jo Bardoel (Radboud University of Nijmegen, University of Amsterdam) reported on the results of a survey that revealed the common understanding of independence among Dutch journalists working for PSM and their perceptions of main constraints on their professional autonomy.

Lastly, Minna Horowitz from University of Helsinki and St. John’s University reported on her background brief for the Council of Europe on information disorder and the ways in which European public service media organizations are countering the complex phenomenon. She gave examples of innovative approaches to reach and educate different audiences as well as of collaborations on fact-checking. One of the most obvious findings of her overview is the disconnect between PSM practices and policy-making: While there’s a wide array of activities that PSM organizations are engaging in, various policy statements and reports hardly recognize them and seldom mention public service media as an actor, or tool, in combating disinformation.

Public Service in Transition in Asia: Many Forms, Many Solutions

The session “PSM in Asia: Current Issues, Debates and Developments” showcased three cases of the survival of the public service mission in different organizational configurations. The panel showcased the rich variety, and context-specificity, as well as geopolitical aspects, of building robust communication and media systems that include a public service element.

Focusing on the case of Bangladesh Television (BTV), Anis Rahman from Simon Fraser University engaged in a passionate defense of ‘state-administered broadcasters’ in the region, arguing that for all their failings (from a Western normative perspective), they perform a fundamental role in areas such as the provision of rural information, the protection of local cultures and the promotion of social norms and values.

Finally, Hamilton Cheng from Taiwan Public Television Service celebrated the achievements of Taiwan public service broadcasters in its 20-year history, while also identifying a number of challenges ahead, including (perhaps most fundamentally) the very low level of per-capita public funding.

Jingwei Wu from Tsinghua University addressed the notion of “the public” in Chinese societies, under the influence of media globalization and digitalization. First, the attention on “the Public” of media in China has risen; secondly, the Chinese society shares a similar notion of “the Public” as the Western countries in recent years; third, processes of digitalization and globalization of Chinese media play essential roles on the transformation of this notion. In addition, the cooperation between politics and capital raises the question if PSB could be suitable for China. The double tasks of Chinese media, i.e., serving the people vs. making market profit, also posed challenges to the public service function of the media in China.