The dividing line between helpers and dissidents is ambiguous if not arbitrary. Often, a specific issue inspires a community that both aims for socio-political and cultural change, as well as offers support (helper) functions. An example of this could be the YouTube-based It Gets Better project, an  initiative that seeks to offer support for Lesbian, Gay, Bi, Trans, Queer youth.

Similarly, there are different modalities of ‘digitally enabled social change’. For example, in their research, scholars Jennifer Earl and Katrina Kimport suggest this continuum of online activism from e-mobilization to e-tactics to actual e-movements: 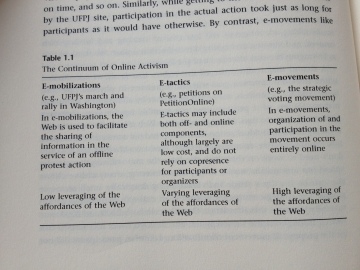 In terms of major aspirations of radical structural change, and acts of resistance, we all are familiar with the the  powerful examples of the Arab Spring, and brave individuals and groups (not only “We Are All Malala” but  also “We Are All Khaled Said”). Yet, political Internet activism has long roots, for example in the Mexican Zapatista movement.

Social media have recently brought different opportunities, and challenges, to E-mobilization, E-tactics, and E-movements. Here’s an insightful account by Rasha A. Abdulla,  associate professor in the department of Journalism and Mass Communication at the American University in Cairo: ‘The Revolution Will Be Tweeted‘. Read her account of Egyptian Spring!

Movements have gone global because of digital media. Arguably, the Occupy Movement, for example, has used an interesting mix of communicative tools and media, from hand gestures to online and mobile organizing — but certainly spread around the world because of social media. (Here’s a fascinating account of the birth of the movement). As we know, Occupy Sandy broadened the movement from protesting to doing hands-on disaster relief work. It also spurred a collaborative documentary project.

Other times, social media platforms feature more spontaneous political reactions and protests, such as the infamous YouTube Muhammad video and its tragic aftermath — and the related Twitter response #MuslimRage that followed, as a protest to a mainstream media story  (a condensed account with a great discussion and a slideshow on HuffPost).

This excellent article from The Guardian showcases an array of examples of political digital humanitarianism (my term, but I’m sure you know where I’m going with it). The blog iRevolution, mentioned in the article, is one of my go-to sources of all things techie assistance from disasters to revolutions.

But, sometimes, digital platforms are not only tools for democracy, but tools for surveillance by non-democratic regimes (as Evgeny Morozov notes).

And that leads us to a very particular form of digital community-building for social justice, the one by those communities that are concerned about our digital (human) rights, and reforming the media themselves, for a more democratic world (the terms often used are Media Reform and Media Justice).

Here’s a short and simple video I did (for a group of Freshmen students) on digital human rights; here’s a related blog post.

In some cases, and countries, media reform efforts take an organized, official form. An anti-copyright movement transforms into a political party, as in the case of the Pirate Party that is active in numerous countries.

Although internet access and digital divide are often considered as basic questions of infrastructure, and hence most often considered as the responsibility of national governments (and activism seeks to change those policies), there are numerous free wireless and mesh network projects that help underserved communities to gain access.

In other cases, issue-driven global communities are formed to counter corporate-driven Internet. Some advocate for, and create, open source code (see Katrina’s great comment on this as a reply for the Digital Helpers assignment); others wish to create a global community that wants to share their creative work with a self-defined licensing, not by corporate-owned copyright. See the short intro to Creative Commons below:

Back to Basics: Internet Freedom

Yet others are fear for diminishing freedom of the Internet itself. Apart from blatant censorship

and dramatic government responses such as the recent one in Syria, there are more ‘subtle’, yet no less important, challenges. Here’s a short video by the journalist/researcher/global internet freedom activist Rebecca MacKinnon (once more — she’s a favourite — in the Oslo Freedom Forum). Using the Nordic telecom company  TeliaSonera as a poignant example, she’s discusses her concern about the ways in which commercial imperatives and business practices may, in fact, endanger free online expression.

Here is an extensive list, compiled by Rebecca, of global and national organizations(communities?),  that work for maintaining the freedom of the networks. (Perhaps you’ll find inspiration from the list for your country case?)

And Personal Democracy Media, an organization of practitioners, scholars, activist, policy-makers already mentioned earllier, offers great video lectures on Net Policy & Activism. The videos showcase how important media policy-making has become in terms of democracy (and possibilities of community-building), and how it thus become a great interest to media-focused activism.

Yet, there are also are those who wouldn’t be interested in participating in global deliberations, but who use direct digital actions to make their voices heard; those whom some call cyber-terrorists, others hails as freedom fighters: The Anonymous and other hacktivist groups. Here’s a great article by the anthropologist Gabriella Coleman on the nature of the Anonymous as a community — “Our Weirdness is Free”. And here’s a Wikipedia timeline on the activism of The Anonymous.

These are all concrete examples of the transformative power of digital media. But they still are relatively isolated experiments, digital communities for social justice only in the making. So the question becomes: Are we, postmodern individualist humans, capable of working together for true freedom and equality? Now that we know more about the world, and connect more easily with others, than ever before in human history — can we really accept others? Or are online communities temporary and fleeing constructions?

Technology isn’t good or bad — it is what we make of it. And as one of the founders of the Pirate Bay, the file sharing site that helped to spark the founding of many European Pirate Parties (political parties), notes:

“You can’t beat politics with new technology all the time. Sometimes you have to actually make sure that politics are in line with what people want. A lot of people are giving up on politics and thinking they can solve issues with technology. These kind of arrogant behaviours towards the rest of the society are a bit disgusting,”