This week, we’ll look at communities that gather online to help; that use digital organizing as one tool in doing good. Next week, we will look at communities that are involved in making social change happen; in using digital platforms to resist, to protest, to offer alternative structures, policies, practices, and  justice. (The two are not necessarily mutually exclusive — but this divide may help us to observe some specific dynamics and practices of the The Helpers and The Change-Makers/Dissidents).

There are a few approaches to the the idea of the helpers: Knowledge about global problems doesn’t necessarily translate into action; we know so much but don’t have the tools to act. Alternatively, we do not commit to real action but, rather, engage in slacktivism… At the same time, individually, we are very committed to technology that facilitates communication (- forming a community – let’s not forget how close those terms are.) But  we can support movements such as the Arab Spring or a lone Pakistani girl wanting to educate herself (“We Are All Malala”) — merely because now we and the world knows, that is already a form of action, a form of international knowledge community, that can force change locally, nationally, regionally. Some people even talk about the do-it-yourself-foreign policy.

But then we have Digital Humanitarianism, well explained in these 3 short TedTalks (please view all — you won’t be disappointed!).

Case: Cognitive Surplus, or, Why We Help?

Digital platforms have not only made us aware but digital tools also help in new, creative ways:

The examples of global implications are endless. 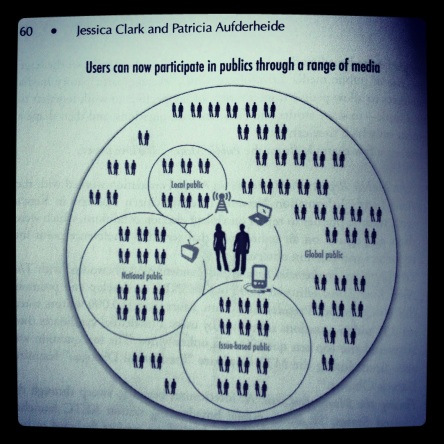 But as the above image shows, people are now part of different publics; they form different kinds of communities. note local effects can be equally important: One of my favourite projects, small but effective, is VozMob, “a platform for immigrant and non-immigrant low wage workers in Los Angeles to create stories about their lives and communities directly from cell phones, thus gaining greater participation in the digital public sphere, especially for those with limited access to computers.”

And then we have issue-driven communities. Apart from all political-social causes, there are the fan helpers like those of the indie rock star Amanda Palmer: Her goal was to get $100,000 but she raised over 1 million on Kickstarter in less than a month (an act so unusual that it even caused a scandal). Harry Potter fans become “cultural acupuncturists” and use their community to evoke human rights activism. And there are friends of pitbulls (like me) who share rescue information, fundraise, and organize adoptions via Facebook. And so on…

Finally, we have national governments increasingly utilizing open data and digital technology. For instance, Icelanders recently approved their crowdsourced constitution. Finland has  launched a government-civic society partnership project for legislative proposals form the citizens… And here’s a short video depicting examples of e-government from the U.K.

Assignments for this week:

PS: Just FYI Case: HONY (just in case you don’t have a chance to see Brandon Stanton on Thursday, 11/5 on campus…)