n quiet on this site, as I’ve traveled to RIPE@2014 and then to Helsinki, for family reasons. Currently, I’m staying in Kallio (the Helsinki hood, not to be confused with the vintage children’s clothing store in Brooklyn). So, Kallio in Helsinki is the Brooklyn of Finland, I’ve been told.

Indeed, most young people I meet and cafes and restaurants I’ve visited (that 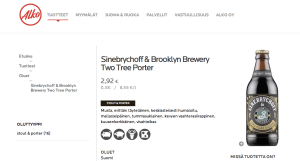 serve Brooklyn Brewery products and the local microbrews) could be in Fort Greene, Greenpoint, Williamsburg, or Bushwick. Formerly, Kallio was known of its hobos and dives, and by its deeply red working class past.

At the same time, I read how Bed-Stuy is being branded as white, that folks are moving out because of stellar rents, that there’s a proposal to build a high-speed gondola between Mnhtn & BK to ease the commute between the two…

Not so long ago, when I was starting over in Crown Heights, it was the only place in the world to me that mattered. I finally belonged the way I wanted to: In a messy, diverse, communal, vibrant place that offered a surprise or a cultural lesson around every corner.

Now, Brooklyn is a global brand and I feel it on Myrtle Avenue, as well as in Kolmas Linja. I know I’m not the only one who’s falling out of love with Brooklyn. And yet it hurts.