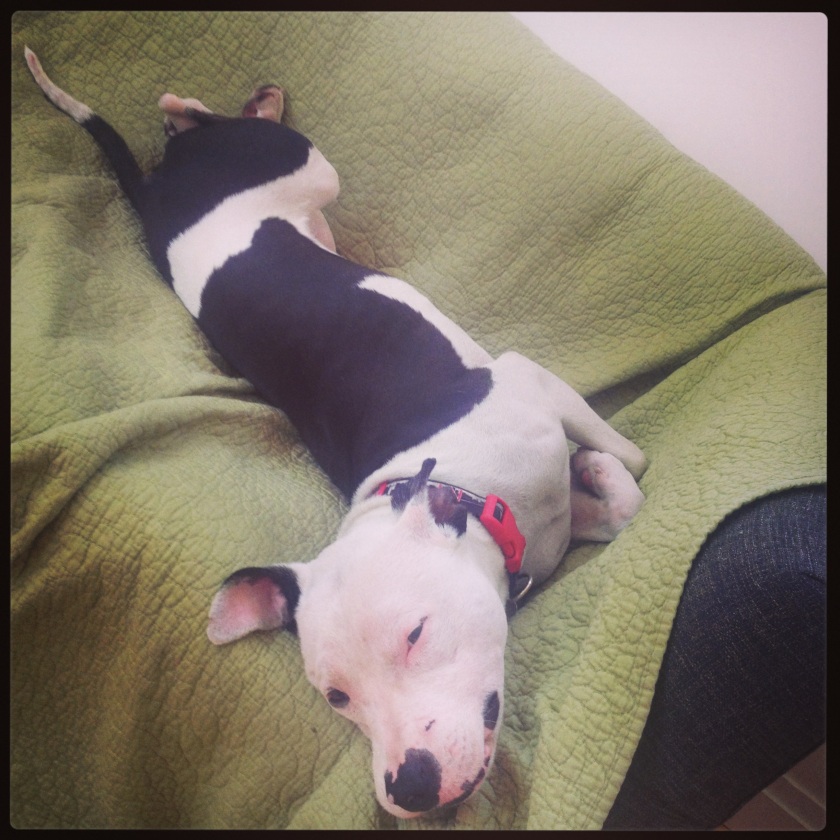 This is Tee, T-LO (The Little One), The Knucklehead. A teenager from the streets of the Bronx.

We got him 3 months ago from the Animal Care and Control in Manhattan. We had been looking for an older, mellow pit-mix for a companion to our Lady Mu… 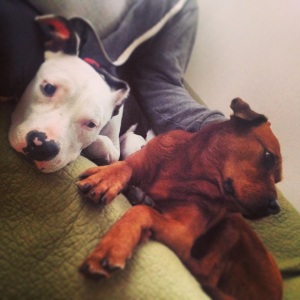 Tee was on the euthanasia list, with kennel cough. We saw a video of him. He was a great size, a pocket pittie. We reached out to the pitbull rescue awareness organization that was posting his information and video clips on Facebook.

We had questions: How is he? Good with other dogs? Is it safe to bring him home to another dog if he’s sick with a highly infectious disease?

He’s submissive and mellow (relatively speaking, as he’s young), most likely house-trained, but guards his food, we learned from the shelter evaluation.

The rescue awareness group simply pointed out to a list of other rescue organizations and asked us to reach out to them: perhaps they could foster Tee while he will get well.

We should have known it at that point that things were not what they seemed.

We waited… And then at the last minute decided to act on faith, reserving Tee from the shelter and thus pulling him off death row, as we didn’t hear from anyone.

Later, only a couple of the groups I had been in touch got back to us. They were very concerned, almost aggressive with their questions, about where we would place Tee (if not at home with our other dog), but offered no help or advice whatsoever. The only concrete advise we got was from a man who had been following my queries on Facebook and had rescued a few dogs himself. 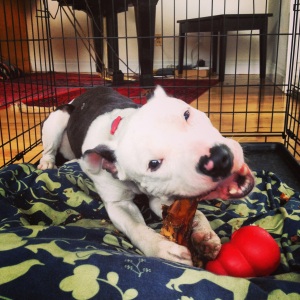 Dogs reserved from euthanasia lists will have to be picked up the next day.

I reorganized my chores to be able to do so. When I arrived to pick up Tee, I was told I’m not allowed to do so without Mu. No one had let me know that before. After negotiations (as Tee would have been put back on the list otherwise), I was allowed to take him home.

Now, some three months since that day, we have discovered that Tee is not food possessive, but very dominant, very active and energetic, as well as male-to-male aggressive. He should have never been offered to home with children (we don’t have any, but this was not mentioned in his evaluation). He clearly had not lived indoors before.

Tee is extremely cute, cuddly, and funny. But he is also stubborn, wanting to run the show, and hence requires plenty of exercise, attention, and effort.

Our mornings begins by me running with Tee while my husband walks Mu for an hour. Tee gets at least three additional walks a day. We train him twice a day and, in addition, work with a private trainer and in a weekly group session. Since he doesn’t like most dogs, if we want to go away we need to pay at least $60 a night to board him as the only dog in a home, or $90 for a private dog hotel room (!).

Not that Tee wouldn’t be worth this all. We have another rescue dog. They often need special attention and care. They take time to adjust.

But then it became clear that my dad, in another continent, is very ill and won’t get better. That I need to go and spend significant amount of time, read months, abroad. I have now taken a leave of absence without pay to do so.

We grew increasingly wary of keeping Tee. How could we provide him with all training and care while I was away? How could we guarantee his progress? We cannot board him for months, and months, given the costs and the fact that now I’m not receiving salary from my job. However, we do not want his aggressive tendencies grow due to possible lack of continuous training and exercise. This is a serious issue, both for him, and in terms of other dogs and humans.

So we thought: Maybe he would benefit from a forever home with active people who would love to run with him and be the calm, assertive pack leaders Tee clearly needs?

So I reached out to the rescue awareness group for help how to find those kinds of people for Tee. Instead, we received a scolding about not socializing him in a correct way (read: the implication is that it’s our fault he’s aggressive). Tee’s interests would not be served if he would be placed in another home. Get a muzzle and a treadmill, I was told. So much for that pitbull love and advocacy.

I reached out to other rescue groups and individuals I trust to help us out in screening possible new owners for Tee.

Through them I learned that Tee wouldn’t be adoptable, and if we would take him back to AC&C (which we would never do) he would immediately be euthanized because of his aggressive tendencies.

We stopped looking for help. We will make this work one way or another. 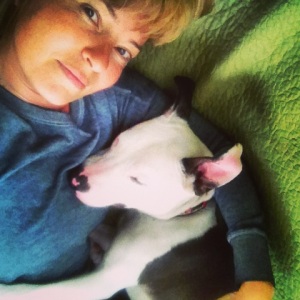 But I learned something about being rescued. I have always been the loudest advocate for rescue dogs. I do, however, think that some of the rescue organizations should perhaps be a tad more responsible about their assessment, advertising, and advise. I have been stunned by the hostile communication I have been recipient of — while we have tried to find the best solution for our Tee. If you advertise euthanasia list dogs while not providing rescue services, be careful. Your overly positive cutie assessments are sweet, but not necessarily realistic. And your scolding via email is not constructive.

I know there are wonderful, heroic, organizations out there, such as Sean Casey, or New York Bully Crew, or WOOF of Sharon Azar, here in NY, that thoroughly assess and rehabilitate their rescue dogs — many of which have a severely troubled history but who are ‘reborn’ in good, knowledgeable hands. If you plan to rescue, go through them.

And lastly, as they say, we got the dog we deserved, that little Tee. Maybe he will keep us focused in these challenging times, and give my hubby plenty to do when I’ll be away.

3 thoughts on “{discovery} On Being Rescued”